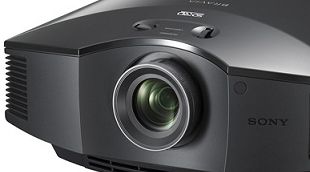 The latest Sony Full HD Projector, the Bravia VPL-HW10, is out now and is most likely the best Sony Home Cinema we've seen so far . The HW10 is much brighter than its predecessors, has excellent contrast, a clear image, and has installation flexibility. This projector offers us an impressive and dynamic image, and it is a very attractive option among the new 1080 line high definition products that recently hit the market.

Advantages of this projector

High Brightness Unlike Sony's previous 1080p projectors, the HW10 projects 697 ANSI lumens in optimized mode, an amount left over to get good results for any screen size in a moderately lit room. In fact, on screens smaller than 120 inches and in darker rooms, the image can be too bright and cause eyestrain. Fortunately, in economic mode (which will allow us to extend the life of the lamp and save energy) the VPL-HW10 lowers its brightness by 32% to 477 lumens, more than enough to enjoy our movies favorites, football or the video game console. High contrast In our test unit measurement, the HW10 has recorded an ANSI contrast of 416: 1, which is the highest we have seen so far in an LCOS projector. Compared to the Mitsubishi HC7000 (409: 1) and the Panasonic AE3000 (443: 1), Sony has achieved better contrast than other LCD manufacturers with this vast improvement in SXRD technology, and At a very tempting price! The HW10 displays deep, solid blacks, perfect details and shadows, and an overall excellent sense of realism and three-dimensionality. The Sony VPL-HW10 has auto iris enabled by default. This adjusts very quickly and its action is almost imperceptible but its contribution is seen: in dark scenes, it notably improves black levels.

Color gamut Provides good colors after initial calibration. In our test unit, the medium color temperature with factory settings was balanced but could be improved. After some calibration, the HW10 produces accurate, natural colors with excellent saturation. Our calibration was very close to 6500K for much of the grayscale. The Sony VPL-HW10 has three color modes for the user, so the user can create his own for watching black and white movies, another for movies, and another for sports or video games . Clear and sharp image Image sharpness and clarity is a must in a high definition projector, and the HW10 does a very good job in this regard. The HW10 is comparable in image sharpness to other recently released 1080p projectors, such as the Panasonic AE3000, but falls slightly short of Mitsubishi FullHD models such as the HC7000% HREF_5.FI % (which, it must be said, have a somewhat higher price). Silent projector (22dB) The Sony VPL-HW10 uses a silent cooling fan, which makes it almost inaudible while in use, even in high-brightness mode. Installation flexibility The HW10 has a manual zoom of 1.6x and both vertical and horizontal lens shift (lent-shift). The vertical shift of the lens has a margin of 2.4 times the height of the projected image, while horizontal has a margin of 0.38 times its width, allowing enough flexibility for a ceiling or rear mounting platform in the most rooms.

Not visible pixel The HW10 is an SXRD projector, which is Sony's version of the LCOS. One of the advantages of this technology is the absence of pixelation or "grid effect" in the image: even standing a few centimeters from the screen we will not see the separation between pixels. Although high definition projectors do well in this regard, the HW10 is an exceptional device in this regard.

Manual zoom Several competing models have motorized zoom, focus, and lent-shift, while the HW10 has manual controls for these settings. However, most users will not be affected by this. It does not have Interpolation Several 1080p projectors on the market have incorporated some type of interpolation, a technology designed to display video and cinema with a higher frame rate by creating 'intermediate' frames, and which serves to reduce or eliminate the so-called effect " judder ".

The VPL-HW10 is one of the most powerful home theater projectors we've seen from Sony so far, and it's the perfect FullHD option for a large projection screen in normal lighting conditions. With its high brightness and excellent contrast, the HW10 can be used with screens of 150 inches and more, as it combines the brightness and contrast necessary for large home theater screens, providing flexibility for placement, silent operation, and natural colors and alive. It is well known that Sony products tend to be a bit more expensive compared to their competitors, and part of what you pay for is the brand. However, it is worth it considering that Sony has a very good reputation for excellent customer service and after-sales technical support. Additionally, Sony projectors have excellent image quality, and the HW10 is no exception. Those who decide on this projector will enjoy excellent image quality, with the confidence that they have purchased from a manufacturer committed to providing good service and products of excellent design and quality.
Rubén Padrós
Sales Dept.
ProjectorsOK.com
Mentioned projectors
» Sony HW10
» Mitsubishi HC7000
» Lámpara Sony HW10
Subscribe here to receive our projector news and special offers